Christmas Celebrations and Traditions in Kefalonia, by Anna

Christmas Celebrations and Traditions in Kefalonia, by Anna

Many of the celebrations are religious in nature and whilst Easter is the most important holiday celebrated in Greece there are still many reasons to come and celebrate Christmas Kefalonian style! You will recognize many Christmas traditions but there are still some important and interesting differences to experience.

The official celebrations last 12 days, from Christmas Day to Epiphany, before that there is a 40 day fasting period. The festive season starts from the beginning of December. There a lot of Saints Name Days in December, and an important one is on the 6th – the celebration of Saint Nicholas. In Greece Saint Nicholas is the patron saint of sailors and is an important figure in the Orthodox Church. In the past people decorated wooden boats in honor of Saint Nicholas – a tradition which still thrives today. In harbors and ports you will see boats decorated with lights. Christmas trees are gaining popularity, but are not part of the old traditions. However, in Greece Saint Nicholas is not Santa Claus and does not deliver gifts – that is the job of Saint Vasilis (Basil) more about him later!

Inside the home traditional decorations were made from branches of evergreen trees, as well as the wild red berries from wild koumaries (arbutus) and myrtles (shrubs with berries). Nowadays the Christmas tree can be found in most houses with the nativity scene at the bottom of it. The outside of the houses are decorated with Christmas lights. 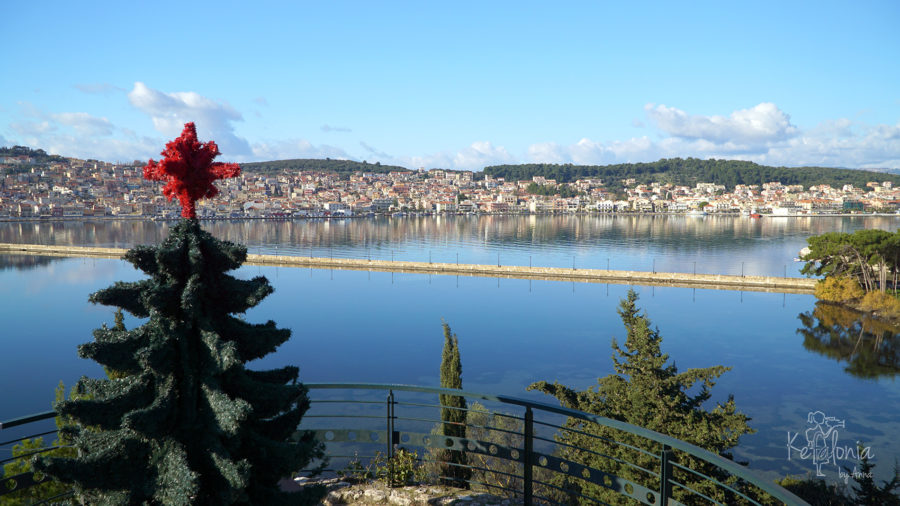 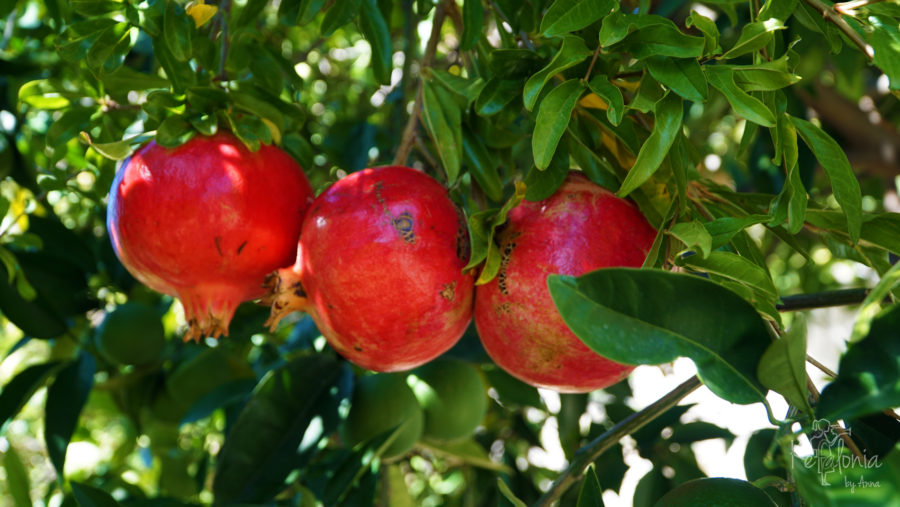 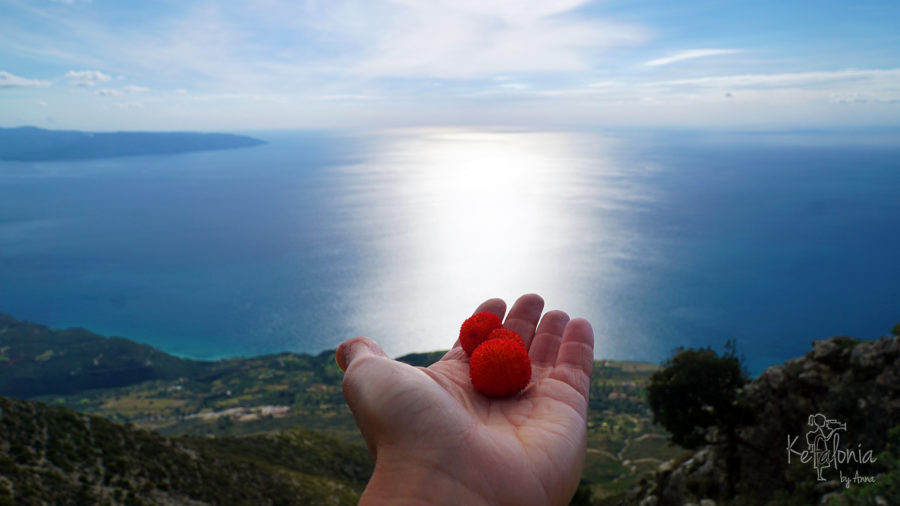 On the morning of Christmas Eve village children sing Christmas carols (Kalanta) at your door, often accompanied with music from a metal triangle or small drum which they bang. Kefalonian carols differ a lot from the carols of the rest of Greece and each region has heir own. They are rewarded with sweets and small amounts of money. Later in the day older choirs who are accompanied by guitars and mandolins sing on the streets, bands also play the kalanta, in all regions of Kefalonia. In past times later on in the evening, with the family gathered around the fire, burning three kinds of wood – olive wood (for a good olive year) vine (for a good wine year) and Schinus (to take away the demons), the “Kouloura tis gonias” (a circular ring of bread) was brought out by the mother. The father cut the bread into pieces according to the number of the people living in the house, then took some olive oil and wine and threw it into the fire through the hole of the bread whilst singing the Apolytikion of Christmas (Hymn).

Whilst in the home a riot of baking has been underway since the start of season; the preparation of festive sweets using a variety of locally sourced ingredients, such as fruit, almonds, walnuts, dried figs and raisins. Delicious honey nut cakes (melomakarona) are baked filling the homes with the aroma of Christmas – cinnamon, cloves, oranges and dried nuts – as well as sugared almond cookies (kourabiedes). Another type of festive bread is the Christopsomo (Christmas bread) traditionally decorated with a cross, in the old days it may have had some more designs on it, and it may also be decorated with walnuts or almonds. Traditionally the Christmas dinner served in Kefalonia was a dish called Avgolemono (thick chicken or goat soup with egg and lemon) but today this has largely been replaced by some kind of roasted meat, mostly goat, or stuffed turkey or chicken. The meal will definitely include some homemade wine and various starters and seasonal salads. By this point the table will be groaning with food, family and friends will then enjoy the sweets! 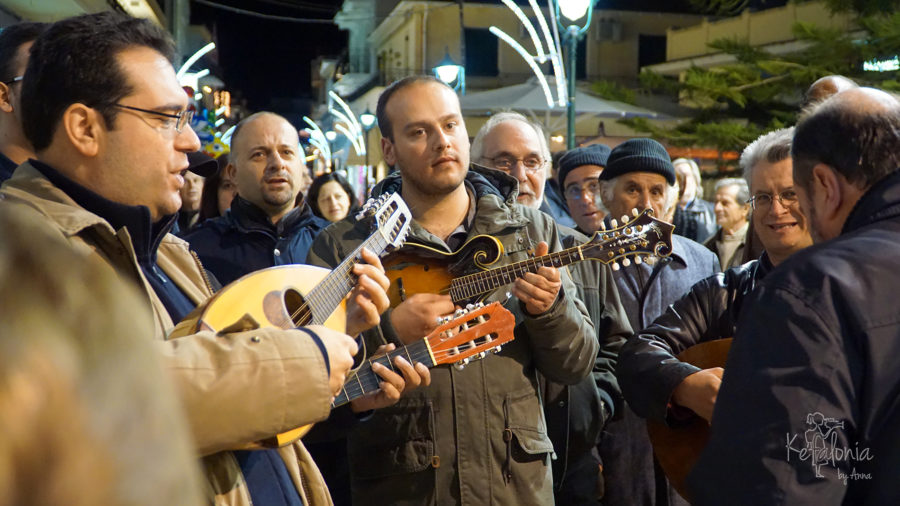 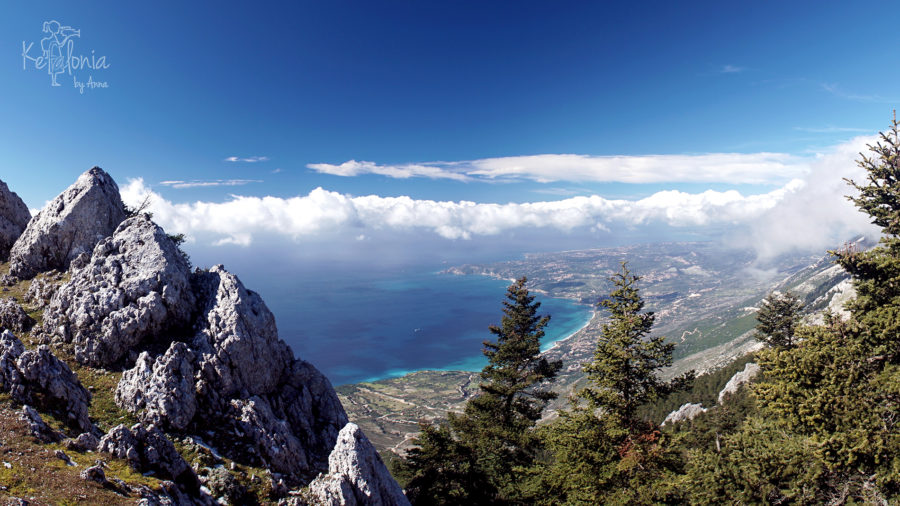 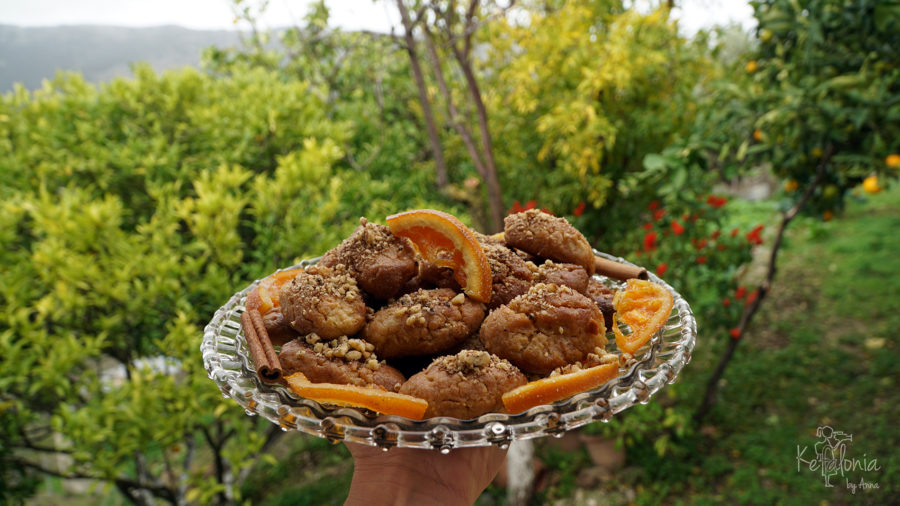 New Year’s Eve sees the home ready for more culinary specialties. The day begins with Tiganites (a kind of pancake soaked in honey) for breakfast. As previously mentioned, whilst Saint Nicholas /Santa Claus is busy delivering presents to the rest of the world on Christmas Eve here in Greece Saint Vasilis (Basil) waits until January 1st. Saint Vasilis is celebrated this day and remembered for his kindness towards the poor. Many children will receive presents on Christmas day and New Year’s Day as these two traditions meet. On the morning of the 31st locals go for a walk to find a plant called Agiovassilitsa or Kremyda (Scilla maritima) and remove it from the soil (there are millions around at this time) they then hang it on the main door of the house for good health and luck. In Argostoli, the capital, a procession makes its way along the Lithrostroto with singing, along with an old “sweet-smelling” ritual that has been revived for welcoming the New Year. People sprinkle each other with colognes and perfume something that should not be missed!

Traditionally the New Years dinner served in Kefalonia was a dish of pork and cabbage called ‘Poutrida’ but again has largely been replaced by roast meat.
The center piece of the New Year’s Day table is the Vasilopita/Saint Basil’s pie – a special cake. The head of the household will cross the cake with a knife and offer the slices in the following order: God, Christ, the Virgin Mary, the house and then starting with the eldest, each member of the family (even those that are not present). Concealed within the cake there is a special coin (flouri), whoever finds this coin is considered to have 365 days of good luck to look forward to! Another way to ensure your luck includes the cracking open of a pomegranate fruit on the doorstep of your home – the wishes are as many as the little seeds of the fruit. 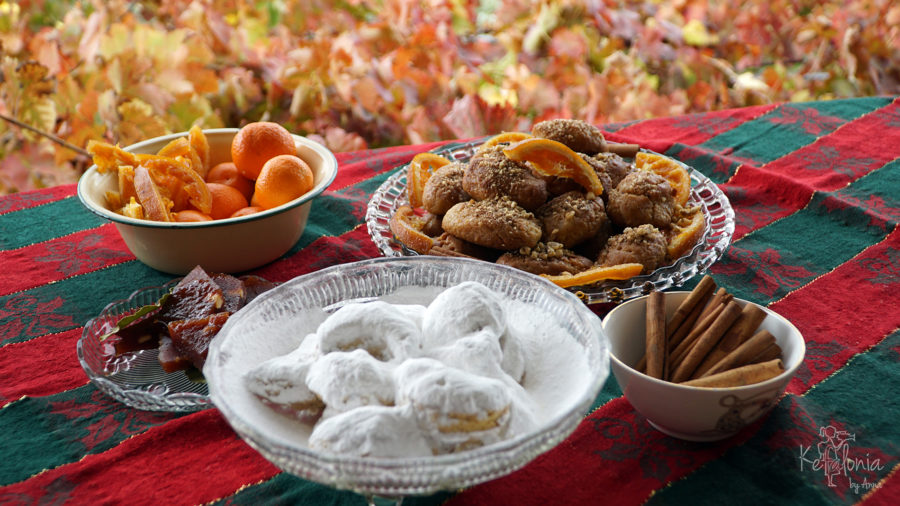 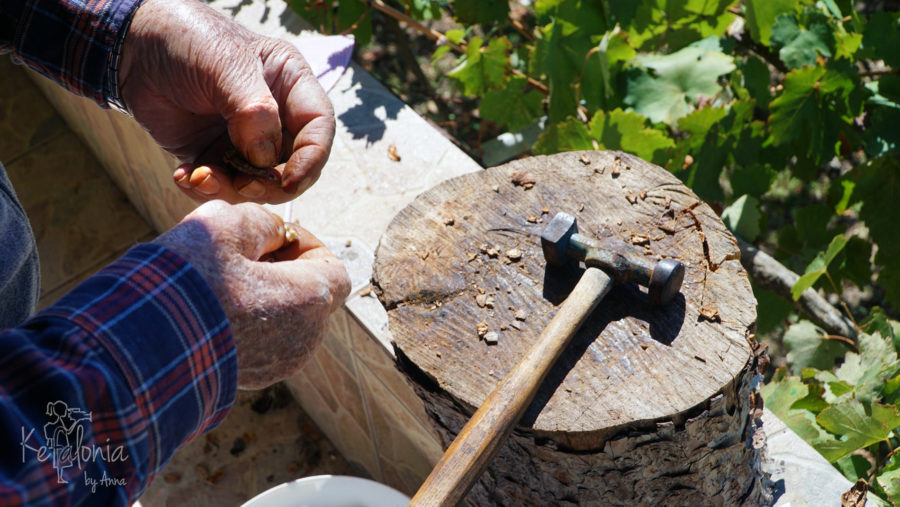 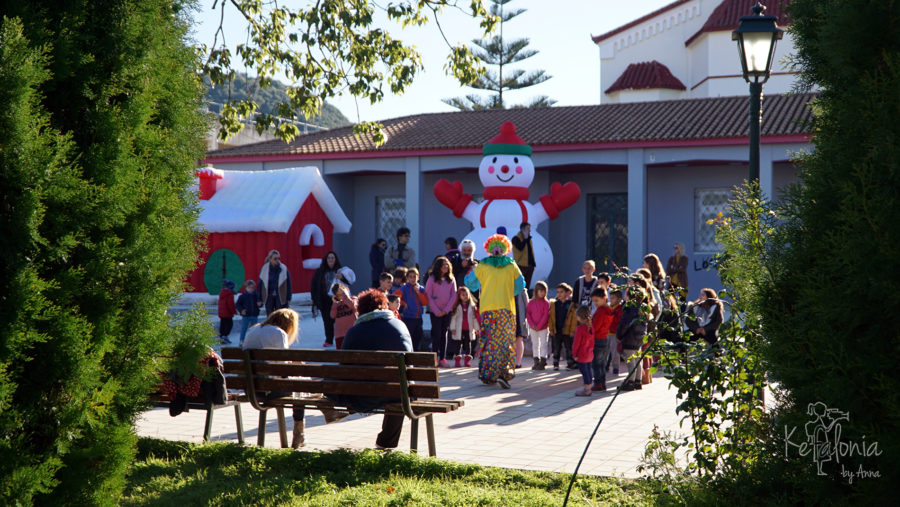 The Epiphany (Ta Phota) concludes the Christmas celebrations here on the island. This is a huge religious feast in the Orthodox Church known as the Baptism of Christ. Throughout Greece the important Agiasmos service is carried out and on most islands and ports it is followed by the priest throwing a cross into the sea. Pagana (the goblins of the rest of Greece) are banished with the throwing of the cross. Traditionally young men would jump into the freezing waters to retrieve the cross and be blessed, but more and more we see young women retrieving the cross! The custom today is to eat “tsigaridia” a traditional dish with wild greens or wild cabbage sautéd with spinach, leeks and onions. Today’s special bread is called Fotitsa (little fire) and it is decorated with a cross and almonds.

Over the Christmas and New Year period visiting family and friends and attending the services are common. But there are many other activities you can participate in. Because the weather is often mild compared to other European destinations during December (average temperature is 13 degrees) it’s another good reason to visit. Although it can be wet the weather does not dampen the celebrations. The square in Argostoli has a nativity and Christmas market, carol singing and live music. Many villages hold their own festivities and it is always nice to travel around the island to see the lights and decorations. 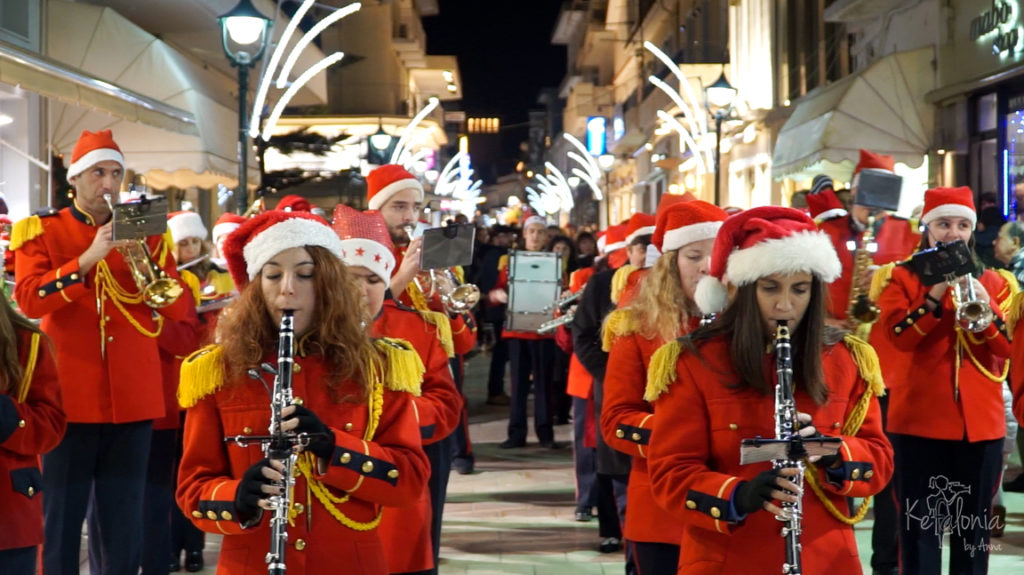 Exploring outdoors during the winter months is also to be recommended. Often snow can be found on Mount Ainos creating a beautiful and tranquil winter wonderland. Wrap up warm and take a walking trail, or go cycling, it’s a quiet time and you get a totally different perspective to the summer season. There are many trees decorated with red fruits, including the Pomegranates, Myrtles and Arbutus Berries, that add to the festive atmosphere.

If you wanted to visit Kefalonia Island to celebrate with us either Christmas or New Year, you will need either to fly from El.Venizelos Airport of Athens to Kefalonia Airport or get to Kyllini port by bus or car and get the ferry to Poros port.