Wildlife Sense Kefalonia is a research and conservation project to study and protect Kefalonia’s endangered loggerhead sea turtles. We asked Wildlife Sense for an interview and despite being extremely busy Chanel Comis (Co-founder and Program Coordinator)  answered our questions in great detail. Our questions arose from watching a 7 day inventory with one of the team – you can read about that here. 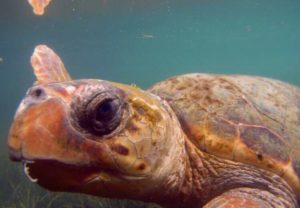 What does the future look like for turtle populations in Kefalonia?
The future of sea turtle population is uncertain in Kefalonia. More and more of their nesting beaches are occupied for tourism, while adult turtles are becoming inadvertently domesticated. Moreover, every year we see more than 40 adult sea turtles dying primarily in fishing net, long lines, and boat strikes.

Have you noticed a change in their behaviour in relation to climate change?
Some changes in sea turtle behaviour we’ve noticed in recent years includes a large number of turtles using the bay of Argostoli and the Koutavos lagoon as a foraging area. Last year we identified more than 100 different sea turtles in the bay, and this year we have already reached that number. We also see changes in the incubation of sea turtle nests. There are more frequent and stronger storms during the summer, but the average temperatures are also increasing so the eggs are affected both by low temperature and by high temperature extremes. We’ve also noticed that their hatching is affected; some nests hatch in very large groups, leaving the rest of their siblings trapped inside the egg chamber. All these mean that nests require more attention and management to incubate and hatch successfully. 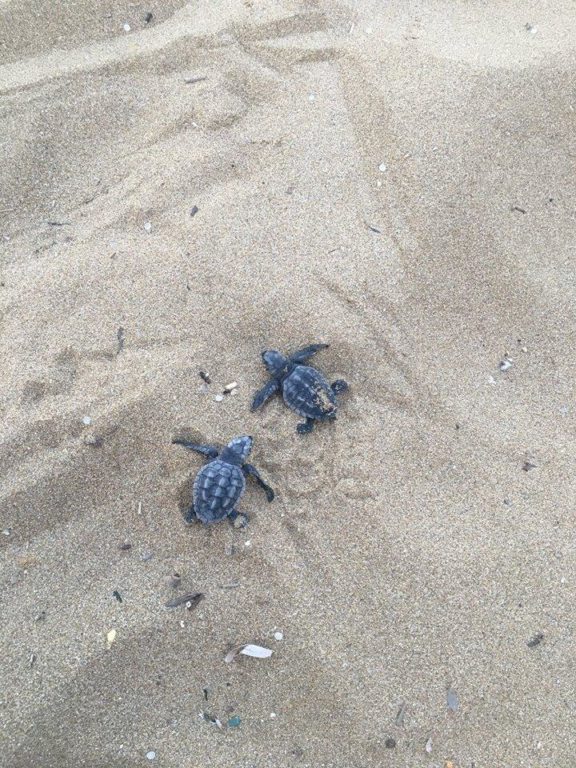 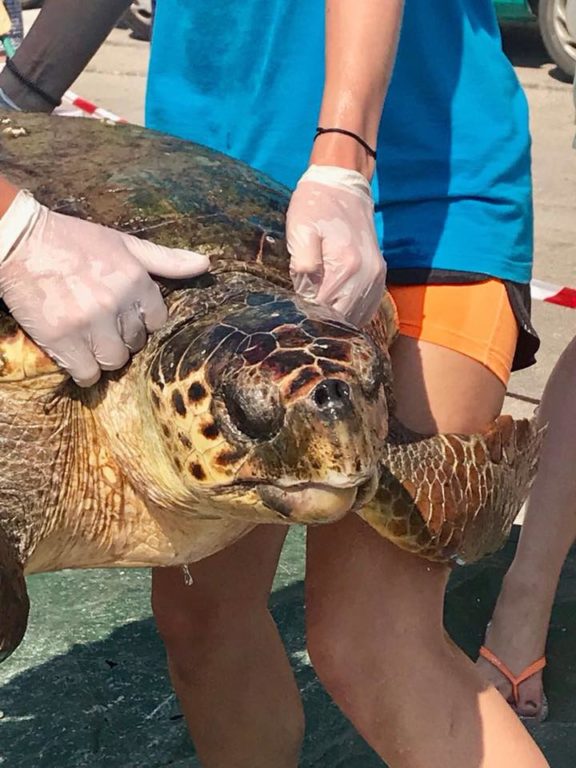 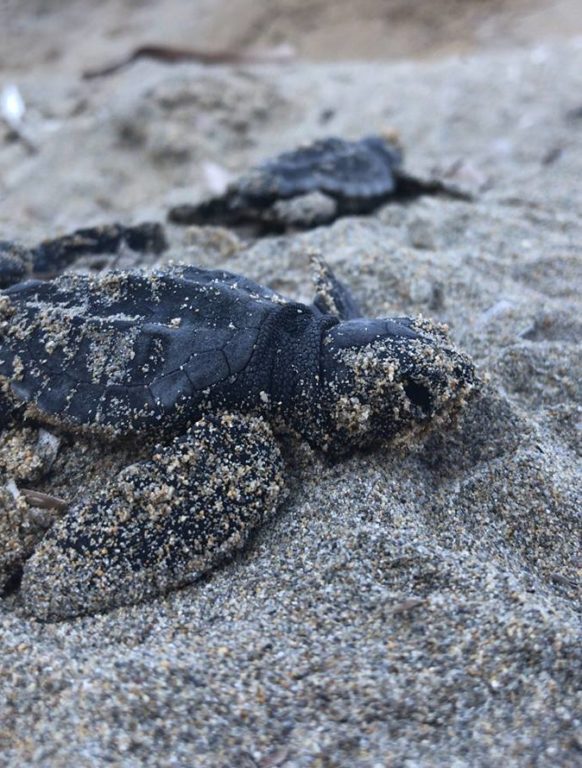 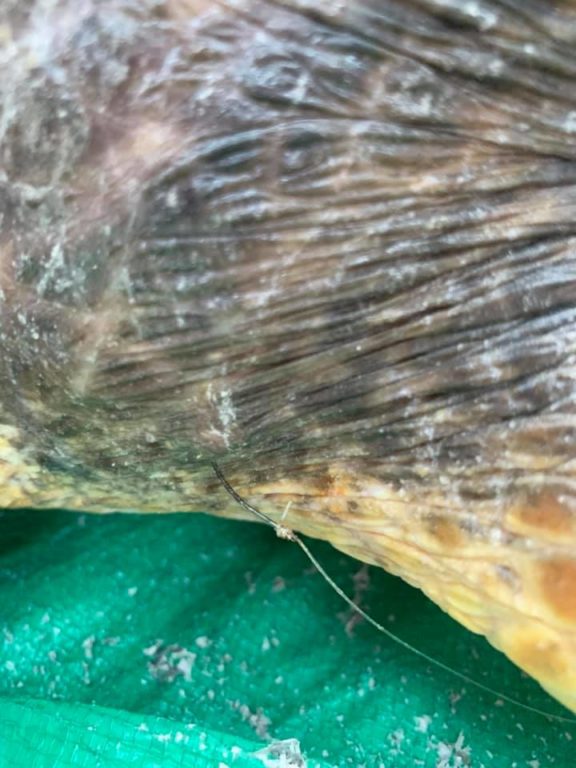 Are local businesses cooperating with your work, particularly beach bars, fishermen and water sports?
Most local businesses are helpful and try to cooperate as long as it doesn’t interfere with their business. What we’ve seen is that due to the lack of the enforcement of rules by all authorities, businesses are rarely willing to turn of their lights, remove sunbeds, or adapt fishing practices even if they know that sea turtles will die as a result. While there are very good exceptions, in the absence of rules every business is worried that if they follow the rules they will lose business because nobody else follows the rules. 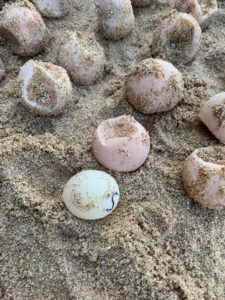 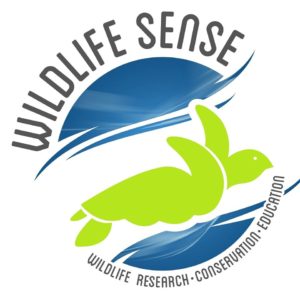 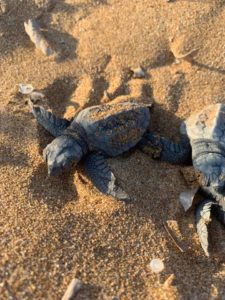 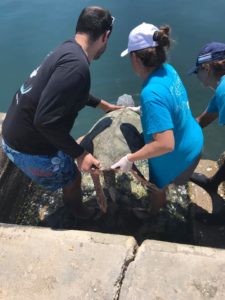 If you had to give one message to the readers of Kefalonia by Anna how they could help to safeguard the future of turtles on Kefalonia what would it be?
If you are visiting the island, talk to the staff or owners of businesses you visit at the beach. To sunbed operators or restaurants and beach bars, ask them if they remove their sunbeds at night and turn off the lights, if they clear any other obstacles, if they are careful not to step on sea turtle tracks in the morning or if they avoid the thoughtless use of plastics. It may not change their behaviour immediately, but it will surely make them know that their valued guests are thinking about these issues. If you live on the island, in addition to the above you can call your local representative, members of the council board from your area, and ask them about these issues, particularly light pollution caused by municipal lighting and the lack of regulation on businesses on the beach. Let them know you’re thinking about these issues when you’re voting. 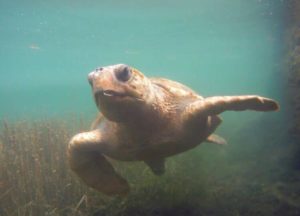 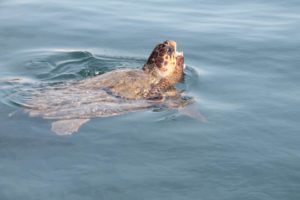 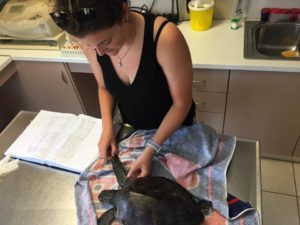 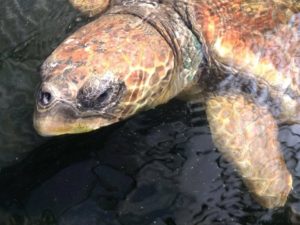 How can people help the turtles either locally or from further afield?
The best way to help sea turtles is to learn as much as you can about them, and about how to best help them, and by spreading the word to the people around you about them. Please do not feed or touch the turtles of the harbour as it is best to keep them wild and free from human interactions. You can also help by directly supporting our conservation efforts with a donation, by volunteering at our project, or by spreading the word to others who may also want to support us. Or just send us a nice message, it really helps while we’re out doing hard field work in the summer! 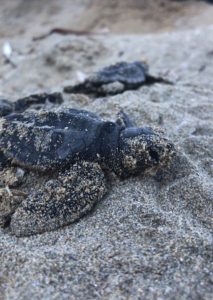 How many turtles have hatched this year and how many will survive to adulthood?
This is a tricky question as we have not looked at the data thus far. Thousands of hatchlings have hatched from our nest. Each nest is around 80% successful (80% will hatch leaving 20% behind which are typically not viable eggs). One in 1000 hatchlings live to become an adult. Sexual maturity (adults) occurs between 15 to 25+ years, meaning they have to live quite a long time to even produce one nest. This is quite difficult in a world with high pollution, fast boats and overfishing. The turtles should be reaching the age of 60 to 80+ years before they die, however the ones we find here in Kefalonia typically die around the age of 30 which is far too young.

Thank you very much to Chanel Comis from Wildlife Sense for her time and knowledge.