The memorial commemorates the Italian soldiers of the 33rd Acqui Infantry Division who resisted and fought the Germans between 13th and 22nd September, 1943 in Kefalonia. In total 1,315 soldiers were killed in battle, 3,000 drowned at sea when the German ships taking them to concentration camps were sunk by the Allies, and 5,155 were executed by 26 September 1943.

The monument is a poignant reminder of one of the biggest prisoner of war massacres of World War II. Kefalonia’s Greco-Italian Society maintain a small museum called “The Mediterraneo Exhibition“, next to the Catholic church in Argostoli, where pictures, newspaper articles and documents showcasing the story of the massacre are displayed.

There are several plaques, one reads;
“THE SOLDIERS OF THE ACQUI DIVISION MARINE GARRISON LED BY OFFICERS ON THE ISLAND HAVE GIVEN IN VOLUNTARY FOR THE FIGHT AGAINST THE NAZI ATTACKER
CASES FROM SEPTEMBER 15 TO 26 1943 DIED IN COMBAT: 65 OFFICERS, SOLDIERS 1250 EXECUTED: 155 OFFICERS, SOLDIERS 5000 MISSING AT SEA: SOLDIERS 3000
ITALY HONORS ITS VICTIMS”

The memorial is located on Spyrou Malaki Argostoli 281 00, in the area towards the lighthouse. 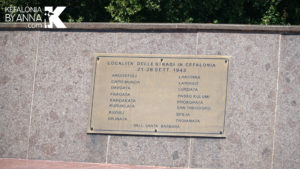 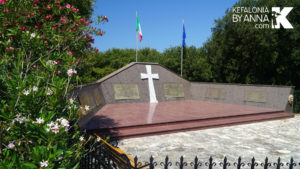 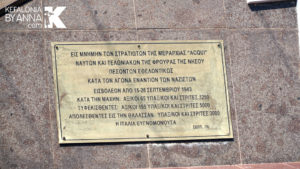