Kefalonia island hosts a wide range of fauna species, vertebrates (birds, reptiles, amphibians, mammals) and invertebrates (insects, spiders, earthworms etc) which has for many years, attracted the interest of researchers from various nations.

Birds are probably the most easy to notice. In Kefalonia due to the variety of habitats there is a great variety of bird species. Estimates (conducted until the present day) report 245 species of birds inKefalonia, that correspond to more than half of the bird species recorded in Greece. In total, 72 of those 245 species – that is, about one third – need protection, according to the Directive 2009/147/EC on the conservation of wild birds.
In the mountainous ecosystems several birds of prey demonstrate an important presence such as the Golden Eagle, the Short-Toed Snake Eagle, the European Honey Buzzard, the Montagu’s Harrier, the Long-Legged Buzzard, the Red-Footed Falcon, the Peregrine Falcon and the Lanner Falcon etc. There are also nocturnal birds of prey (the Little Owl, the Eurasian Scops Owl and the Tawny Owl) and numerous passerine species such as the Eurasian Skylark, the Tawny Pipit, the Dunnock, the Black Redstart, the European Robin, the Woodchat Shrike, the Common Blackbird, the Mistle Thrush, the Eurasian Blackcap, the Subalpine, the Spotted Flycatcher etc.
Because Kefalonia is located above the great migratory crossing of the Ionian Sea, the wetlands of the island (Livadi Wetland, Argostoli Bay, Koutavos Lagoon and the Tzanata Artificial Lakes) are important refuges for many rare visitors and waterfowl such as: Mallards, Marsh Harriers, Herons, Cormorants and Swans.
Off course all around the island you can enjoy a great variety of sounds from common small birds like Sparrows, Wagtails, European Robins, Common Blackbird, European Goldfinchs etc. 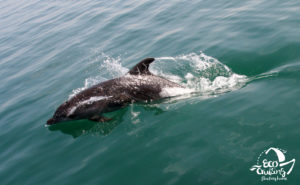 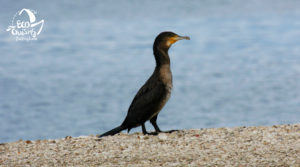 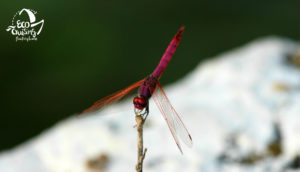 As for reptiles and amphibians, 24 taxa of reptiles and 5 species of Lissamphibia have been recorded in total untill now. From them the Hermann’s tortoise Eurotestudo hermanni, the lizard Anguis cephalonica, and the snake Elaphe quatuorlineata are evaluated, according to IUCN, as Near Threatened (ΝΤ).
The most common lizard is the Balkan wall lizard (Podarcis tauricus subsp. Ionicus) an endemic subspecies of Epirus, the western Peloponnese and the Ionian islands. Also the Peloponnese slowworm (Anguis cephalonnica)- that is a lizard although it looks like a snake- is an endemic species of Peloponnese and the Ionian Islands, Kefalonia, Ithaca and Zakynthos while the Blue-throated Keeled Lizard (Algyroides nigropunctatus subsp kephallithacius) constitutes an endemic of Kefalonia, Ithaca and Lefkada.
The rarest snake species of Kefalonia is considered the Balkan Whip Snake (Hierophis gemonensis) while the Montpellier snake (Malpolon insignitus) appears to be the most common. Very familiar to the Kefalonian people is the cat snake (Telescopus fallax) since several individuals are collected every year around the Dekapentavgoustos time (August 15, a holy day to commemorate the passing of Virgin Mary) by the villagers of Arginia and Markopoulo and placed in the churches and on the icons of Virgin Mary. Their appearance is considered a good omen! 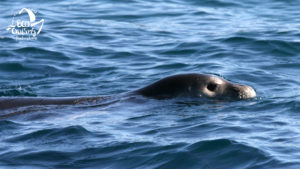 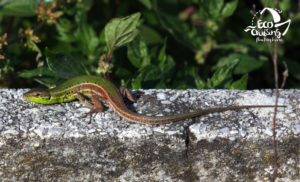 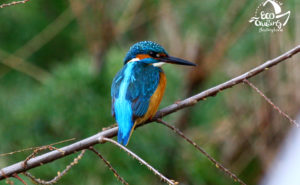 The mammals here are mainly medium and small-sized such as the European hare, hedgehogs, shrews, rodents, moonrats, martens, badgers etc. The presence of bats, with more than 15 species, is important. Among them the bat Miniopterus schreibersii has been evaluated globally, as Near Threatened and the bat Myotis capaccinii as Vulnerable (VU), according to the IUCN.
In the south – south-east outskirts of Mt.Ainos live the largest mammals of the National Park, but also of Kefalonia. These are the semi-wild horses of Ainos (Equus caballus), the most emblematic species of the National Park. 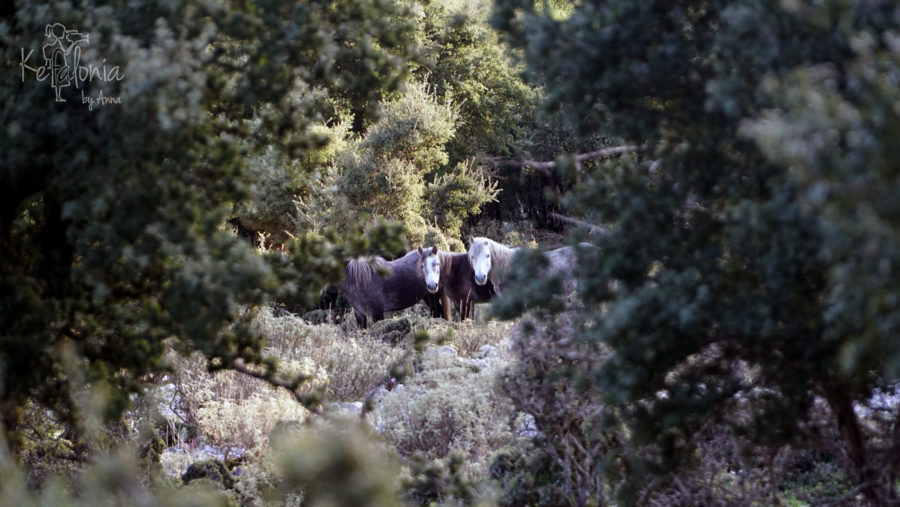 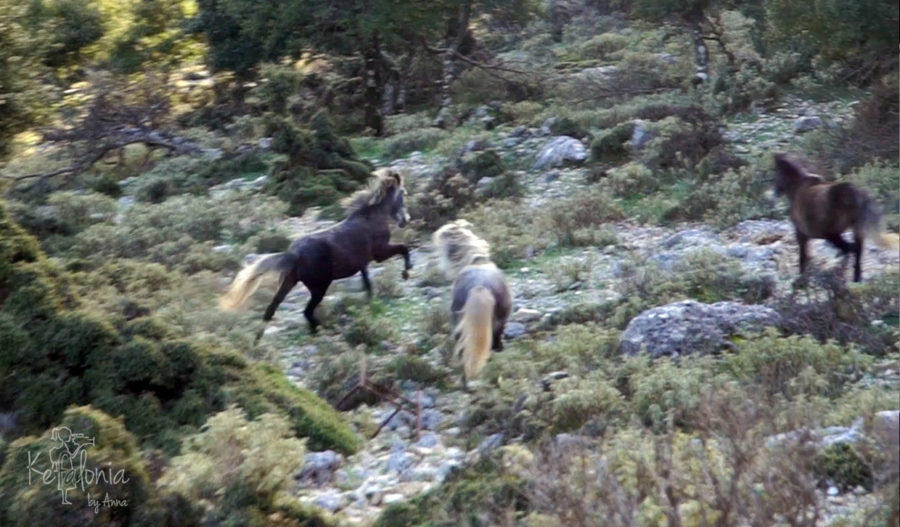 Horses on the trail 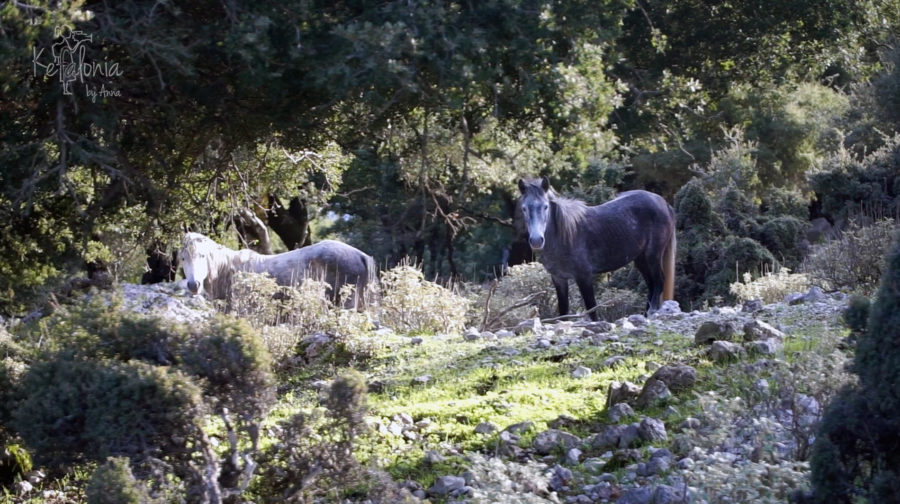 As for invertebrates, a silent microcosmos is all around us. We just have to look carefully to locate it. Conspicuous attractions of the island, with over 60 different species (more than 25% of the country’s species!) are the butterflies. Among the butterflies of Kefalonia, a subspecies, Hipparchia volgensis delattini is endemic to Europe. Also four species : Pseudophilotes vicrama, Hipparchia fagi, Ηipparchia statilinus and Thymelicus action are assessed as Near Threatened in Europe according to the IUCN. All of the above are visible during the day. However, here you can enjoy a beautiful sight during spring and summer nights: whole areas where fireflies light up the dark with their fascinating bioluminescent mating displays!

Read about Flora in Kefalonia and our introduction to Biodiversity on the island.