In 1865 the Prefecture of Kefalonia was created consisting of three provinces. In 1952 Ithaca finally returned to the prefecture and the provinces became four. But in 1997 project “Kapodistrias” created administrative reconstruction, and the prefecture of Kefalonia divided into 8 municipalities, and the Community of Omala. However, from January 2011 the islands became a single municipality but locals still refer to the old municipal areas of Argostoli, Elios-Pronnoi, Erisos, Leivathos, Paliki, Pylaros, Sami, Omala Community and Ithaca. 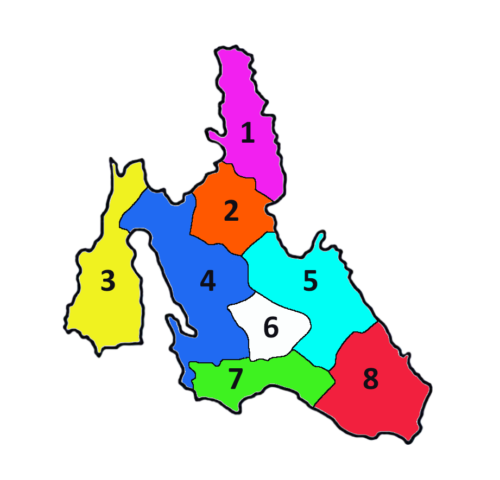 1. Erisos
Located in the northernmost part of the island, two of the most beautiful places in this region are the small harbour villages of Fiskardo and Assos, with it’s Venetian Castle.  This is my favourite region with it’s wild stone landscape, great views with amazing perspective due to the forests of cypresses, small villages with preserved traditional-architecture, magical small pebble beaches with green colours, and great walking routes.

2. Pylaros
Pylaros is located in the north central part of the island, making it an ideal base to stay and explore the other regions. You can watch the sun rise at the quaint fishing village of Agia Efimia , and watch the sunset, at the other end of the valley, on the most famous and dramatic beach of the island –  Myrtos.

3. Paliki
Paliki is a peninsula, located on the most western part of the island, and is the flattest part of the island (there are many farms) with interesting soil formations, and unique beaches which differ from the rest of the island. Lixouri is the main town here, with regular ferry connections to the capital of Argostoli. There are some amazing and unspoilt beaches on the south and western side of Paliki like Manias and Platia Ammos, as well as two more on the north east of the peninsula; Fteri and Amidi. The famous beaches of Xi and Petani, can be found in this region too.

4. Argostoli
This region is named after the capital of Kefalonia, a beautiful city built around the edge of the great Koutavos lagoon, featuring the impressive Drapano bridge and monument. In Argostoli city you can feel the vibe of the real, every day life of modern Kefalonians. The fruit, vegetable and fish markets, businesses, cultural center, nightlife, are found in the capital and venturing further afield there are some great attractions for visitors, including two of the most famous beaches  Platis-Makris and Gyalos, at the famous tourist resort of Lassi.

5. Sami
Sami town is a major port on the island, in this region you can find some of the best attractions such as Melissani Lake, Drogarati Caves , Antisamos Beach, and Karavomilos Lake. This region of the island is a good central location to stay and explore north and south.

6. Omala
This is the religious center of the island and it’s here you will find Saint Gerasimos Monastery. Omala lays on the slopes of Mount Ainos and abounds with beautiful valleys with vineyards, producing the famous local Robola wine.

7. Leivathos
Lying to the south-east of Argostoli, Leivathos is the central south coast area of the island. The largest towns here are Peratáta, Svoronáta, Vlacháta, and Lakithra and the region flows from the foot of Mount Ainos and ends at a number of  sandy beaches. Leivathos is historically the most affluent area of Kefalonia so you will find some of the most beautiful villages of the island built by the ship-owners. The area has a wealth of historical monuments to visit including Saint George’s Castle (Kastro), and the Mycenaean tombs at Mazarakata.

8. Elios – Pronnoi
Located on the south-east of the island, Elios-Pronnoi is a beautiful area with lush vegetation and many archaeological sites. Here you will find several mountain ranges, including the eastern part of Mount Ainos. The most famous tourist resort of Skala is here, with it’s long sandy beach and the beautiful seaside village of Katelios. Another important town here is the port and resort of Poros.