Here are a few traditional Christmas recipes for you to try at home!

Put all of the meat into a pot and just before boiling point remove any scum that has formed, add salt. Lower the heat and simmer for approximately  2 hours making sure there is plenty of water. Strain the stock then bring it to the boil again adding the rice. When the rice is cooked return the meat to the pot. Meanwhile, beat the eggs together adding lemon juice drop by drop. Take some stock in a ladle and add it slowly to the eggs and lemon mixture stirring constantly. Remove the soup from the heat and finally pour the egg and lemon mixture into it. Serve with black pepper. 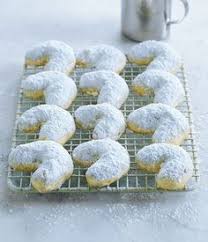 Beat the butter until pale, add the egg yolks, brandy, sugar, almonds, flour and the baking powder. Mix into a dough – it should be stiff but easy to knead. Shape the cakes into small half moons and place them evenly on a greased baking tray. Bake then for about 30-35 minutes. As soon as you remove them from the oven put them onto a bigger tray sprinkle them with the rosewater and cover each cake generously with icing sugar. Traditionally served on a flat plate. 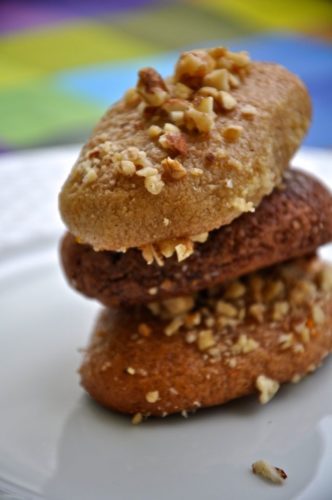 For the syrup:
2 cups of sugar
3 cups of water
3 cups of honey
juice of one lemon
walnuts and cinnamon for sprinkling

Put the flour and butter into a large mixing bowl. Beat the butter well adding the oil, then add the sugar, cinnamon, cloves, orange peel, soda and yoghurt. Knead the dough well and add the walnuts. Divide the dough into portions and roll into small cigar shapes, make sure each cigar has space as they will rise, bake until browned. When the cakes have cooled prepare the syrup. Boil the sugar and the water together for 10 minutes and then add the honey. As the syrup is boiling add as many of the small cakes into the pans as will fit comfortably. Allow to boil for 1 minute, then remove immediately and place on a baking tray. When the cakes have all been treated supplement the boing syrup with 1-2 cups of water. Once the syrup boils again put 3-4 cakes into it at a time using a straining spoon and dip for another minute. Remove, sprinkle with walnuts and cinnamon. Treat the rest of the cakes the same way until you have finished.